– a scratch cavalry unit in the Indian Mutiny.

Regiments of yeomanry – i.e. volunteer, part-time cavalry – first come into prominence at the beginning of the war against France in the 1790s. These mounted regiments were formed all over the country, largely from rural gentry and farm workers, to provide a cavalry arm to other volunteer units also being raised. The prime function of all these new volunteer units was, of course, purely local and defensive – to protect their own area against French attack. Apart from the Castlemartin Yeomanry who were called out during the French attack on Fishguard in 1798, they saw no active service and did not go overseas.

What were called yeomanry units served in South Africa in the 1870s: the Cape Mounted Yeomanry fought in the Frontier and Zulu campaigns of 1877-79 and in Basutoland in 1880-81. Perhaps the most familiar yeomanry activities to the medal collector are those associated with the South African (Boer) War of 1899-1902. Such was the urgent need for mounted forces that British county Yeomanry regiments – still purely “home defence” forces – were allowed for the first time to raise volunteers (designated as “Imperial Yeomanry”) for active service overseas. Thousands rushed to volunteer and they ultimately served all over South Africa, though each contingent was only to serve overseas for one year and most only served in 1900-01 or 1901-02.

However, there was one earlier campaign which had created and employed a mounted unit which was, by title at least, a yeomanry formation. During what is known in Britain as “the Indian Mutiny” of 1857-59, there was equally such a desperate need for mounted forces – in fact, at the height of the crisis in 1857 for any forces – that all sorts of scratch units were raised from men available “on the spot”, whether they were military or not. 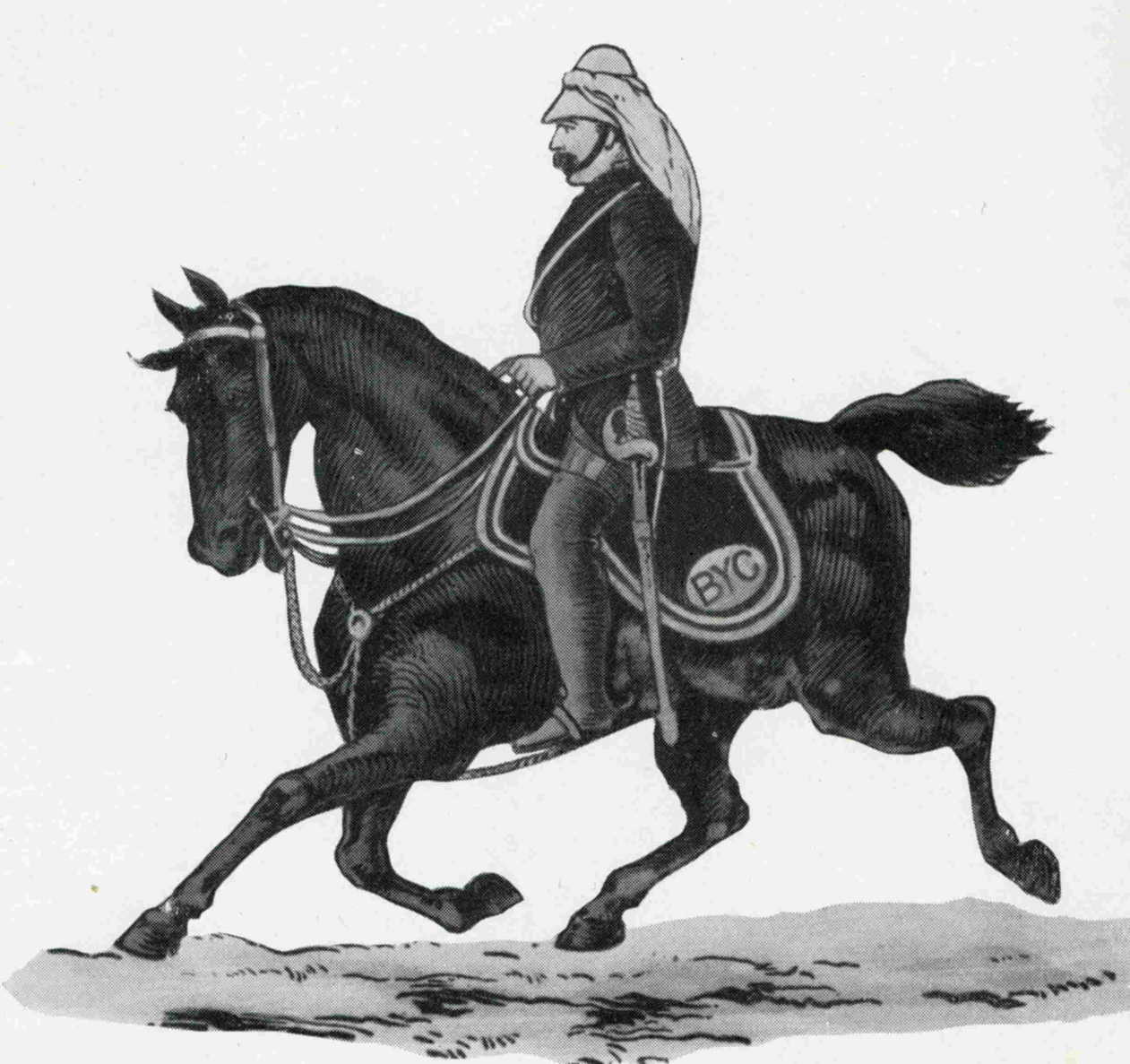 A trooper of the Bengal Yeomanry Cavalry.

One such ad hoc formation born out of the immediate need for mounted troops was the Bengal Yeomanry Cavalry. The original order to form the unit appeared in The Calcutta Gazette as early as 23rd July 1857 – the crisis of the Mutiny only beginning in May. The announcement claimed that “there are in Calcutta, Bengal and the North Western Provinces many Englishmen and others whose peaceable avocations have been interrupted by the disturbed state of of the country and who, although in no way connected with Government, are willing and eager to give active support to its authority at the present time by sharing service in the field with the troops of the Queen and the East India Company”. The Governor General therefore directed the formation of “a Corps of Cavalry to be called the Bengal Yeomanry Cavalry and to be equipped and prepared for duty in the disturbed districts”. Under a Major as Commandant, its strength was to be fifteen officers, one Doctor and 200 men in four troops; it actually took the field later in 1857 with 258 officers and men. The Yeomen would enlist for one year (which could be extended if circumstances required) and all uniform, weapons and equipment, including horses, were provided by the government. Most unusually, it was allowed that the four Lieutenants commanding troops “will be chosen by members of the Corps from amongst themselves”. The first CO (just arrived from furlough in England) was the renowned Major J. R. F. Richardson, called by Malleson “the most gallant man living”. An officer of the Bengal Irregular Cavalry, he had served in the Punjab in 1848-49 and had been wounded seventeen times leading the stormers at Multan! He was given the CB for his Mutiny service.

Who joined such a regiment? It seems that the personnel were taken from just about every walk of life from Calcutta and beyond – “strays”, merchants, planters, teachers, clerks, “seafarers” arriving in the port and young British or EIC army officers who had had not reached their regiment or had no regiment left to serve following the mutiny or disbandment of their own unit. Also note that it was open to Englishmen “and others” – Anglo-Indians or Eurasians “of good character” were also enlisted. The result must have been a very mixed body of men in terms of ability and experience, united only by their general fitness, their desire to serve and presumably – as “Yeomanry” – their ability to ride.

The regiment was given a practical yet typically distinctive uniform – corduroy breeches with knee-high boots, loose blue flannel blouses (“called ‘jumpers’ by diggers in Australia”) and grey felt helmets “enveloped in huge white turbans”. This provided “a rough and ready uniform in which they certainly looked a dashing set of fellows”. Their personal arms comprised a heavy sabre, a light carbine and a “formidable” revolver. Despite the “scratch” and mixed nature of the regiment, there was also a smart full dress uniform, but given their circumstances there can have been little opportunity to wear one – a French-grey tunic with dark blue facings, matching blue overalls and black leather belts and pouches with silver or steel  “BYC” badges. The dress helmet was covered in black cloth and surmounted by a lion couchant. Surviving examples of any of this must be very rare.

The BYC joined an operational force at Chatra on the Nepal frontier in January 1858 but they largely served in the column under Brigadier Francis Rowcroft – a Bengal Army officer since 1819 who was to receive the CB for his efforts – operating in the upper provinces of Bengal and Oudh. It was often the only cavalry force present with the column, such was the shortage and dispersal of mounted units. Their main task initially seems to have been to contain or attack enemy forces threatening the flanks of the major British columns operating against Lucknow and later in the re-conquest of Oudh. On several occasions, Rowcroft’s column found itself in the depths of remote rural areas literally surrounded by hostile forces – both trained mutineers and local sympathisers – and it really cannot be said that the BYC had anything like a comfortable or easy war. Cavalry units, regular and irregular, were spread very thin during the campaign and most saw continuous and arduous service.

The Indian Mutiny medal without clasp to a Bengal Yeoman.

Apparently nicknamed “the Devil’s Regiment” by their enemies, the BYC shared with many others during this long and severe campaign the continuous round of movements, trial by climate, disease and terrain and fairly constant actions; what one account called “long marches, exposure, fatigue and harassing patrol and picquet duties … borne … in a truly soldier-like spirit”. It is not possible in this space to follow their movements and actions in any detail, but they certainly saw “active” service in months of campaigning. Perhaps the BYCs severest action – and greatest triumph – came at Amorah (or Amorha) in Gorakhpur district on 5th March 1858. Rebel forces under Muhammed Hussain numbering 14,000 were attempting to attack Azimghur but were driven back to Belwa and seven field guns captured. The BYC made three successive and successful charges to protect the flanks of their column while the famous Pearl naval brigade under Capt. Sotheby led the forward assault. Days later, the BYC were again in action in further attacks on the same enemy forces. They rendered equally valuable service on 17th April at Tilga (also known as Thamowlee) where, as Rowcroft reported “the right squadron … made a noble home charge and, though they came upon a large body of the enemy behind a village and the sepoys made a desperate resistance, nothing stopped this brave cavalry and they cut down and killed great numbers…the enemy were completely dispersed.” The BYC paid a severe price here – one officer and one man killed, four officers and twelve men wounded. The BYC also served in the attack on the fortress and town of Banki where “though facing vast numbers of mutineers, [they] drove the enemy to flight and a troop under Lt. Percival annihilated the enemy’s rearguard.” Other notable BYC actions include those at Dumureagunj on the Rapti, on 26th November and 3rd December 1858, at Toolsipore (“1st action”) on December 23rd and at Kanda Koti on 4th January 1859, where one of the last groups of mutineers was driven into Nepal. Most of these actions have been lost in the recesses of Indian military history – but they are reminders of the extent and complexity of an uprising and campaign which was fought far beyond the much more familiar Delhi/Lucknow operations.

The BYC served through the campaigns of November and December 1858 and into the Spring of 1859, which saw the final destruction or dispersal of organised enemy formations. The Indian Government, in writing to congratulate Rowcroft on his activities and successes, specially referred to “the Bengal Yeomanry Cavalry [who over the past twelve months] have eminently distinguished themselves and the Government has repeatedly acknowledged their gallantry in the field and their exemplary conduct on all occasions.” 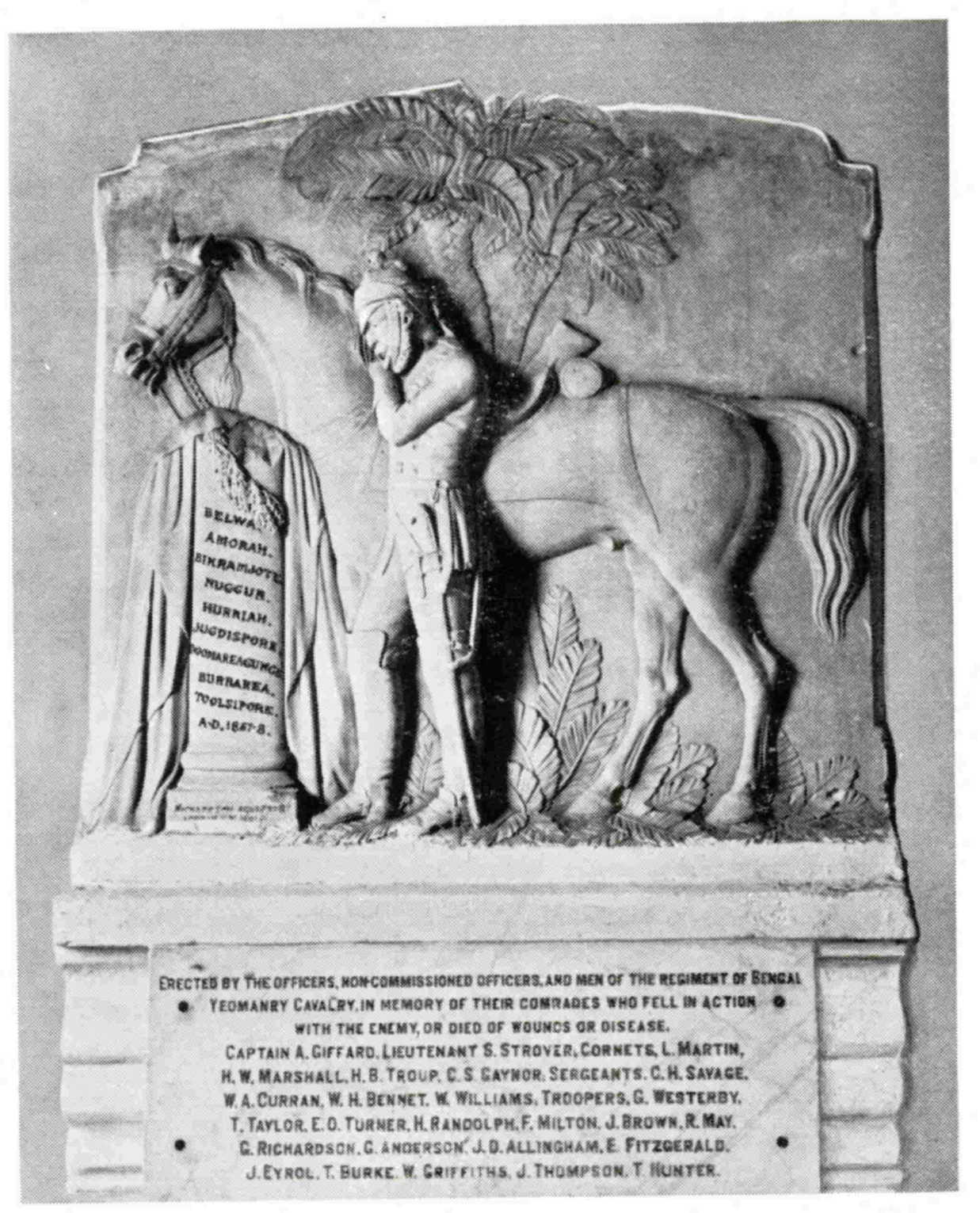 The regiment’s overall casualties were quite severe – for its size. They include:

(It is assumed that those for whom no date or action is listed died of disease or the effects of climate.)

The BYC was formally disbanded in Calcutta in May 1859 at the end of the campaign. Sir Colin Campbell is known to have remarked that the BYC was over-expensive, costing three times as much to arm, equip and pay as a regular cavalry unit. Nevertheless, they saw a remarkable variety of service over a large area and on several occasions acted decisively in action – earning the general commendation of their column commanders.

Today, the Bengal Yeomanry Cavalry is all but forgotten and little information on them can be found. The best two works are “Volunteering in India : an Authentic Narrative of the Military Services of the Bengal Yeomanry Cavalry during the Indian Mutiny and Sepoy War” by J. T. Nash, published by George Philip and Sons in 1893. It is the only full account of the day-to-day movements and actions of the corps by one who served with it, but regrettably has few references to named individuals. An abbreviated record of the Bengal Yeomanry Cavalry, as a regimental “ancestor”, can also be found in “The Calcutta Light Horse 1759-1947” published as a memorial record by a CLH committee in 1957 following its disbandment in 1947.

Although a small unit, like many other such scratch formations during the Mutiny, medals to the BYC (all without clasp) are occasionally seen, though probably no more than 300 were issued, and medal collectors may reflect that their service reminds us that a no-clasp Mutiny medal is not to be despised – it may sometimes mask a very active and interesting career.