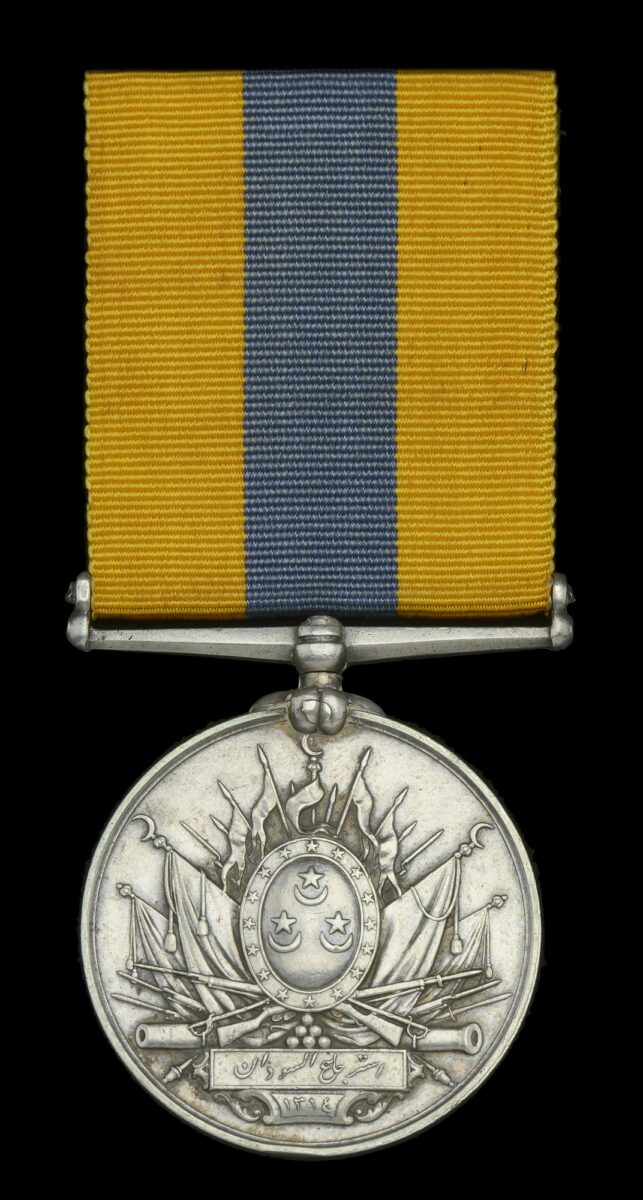 The Khedive’s Sudan Medal of 1896-1908 is fairly often seen. This large and attractive medal was awarded to British, Indian, Egyptian and Sudanese forces engaged in the campaign in the Sudan between 1896-98, in subsequent “clearing up” operations and in later punitive expeditions up to 1908, after which a new type was introduced. It covers service in some of the most inhospitable campaigning areas imaginable.

The 1896-98 “Anglo-Egyptian reconquest of the Sudan” was technically a joint affair, supposedly not simply related to British imperial concerns. It was meant to restore the Sudan to its former ruler, the Khedive of Egypt (acting nominally on behalf of the Ottoman Sultan), following its occupation by Mahdist forces in the 1880s. The Khedive’s medal was an Egyptian reward to all naval and military forces serving south of the frontier at Wadi Halfa and around Suakin on the Red Sea coast. 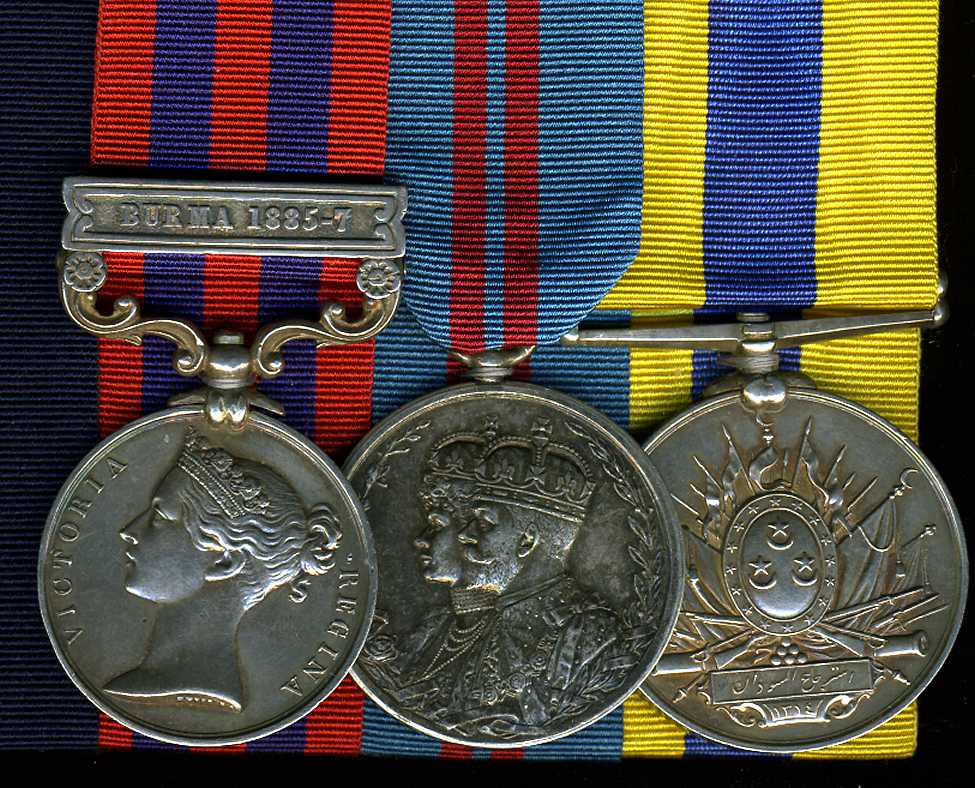 Group to an Indian Army doctor who was at Suakin in 1896; no-clasp Khedive’s Sudan.

The contemporary British (Queen’s) Sudan Medal carried no clasps – unusually for a major campaign medal at that date – but the 15 clasps on the Khedive’s award presumably filled the gap. However, despite so many clasps, the medal is most familiar to purely British forces carrying a very limited range, those with more than two clasps being uncommon to British recipients. The most often seen are The Atbara, for the major battle fought on 8th April 1898, and Khartoum, for the decisive victory won by General Kitchener at Omdurman on 2nd September. Sometimes seen to British units is Hafir, for the advance southwards towards Fareig during the early phase of the operations in 1896 (“the Dongola campaign”); half a battalion of the 1st North Staffs and the Royal Irish Rifles were awarded this clasp. The rarer Firket – the first-awarded clasp to the medal, for the battle on 7th June 1896 – is sometimes seen to the machine-gun sections of 1st North Staffs and Connaught Rangers, though only 25 men in total, and is otherwise rare to British units. Medals with no clasps at all were awarded to some Indian forces and HM ships Melita and Scout for garrison duty at Suakin in 1896. 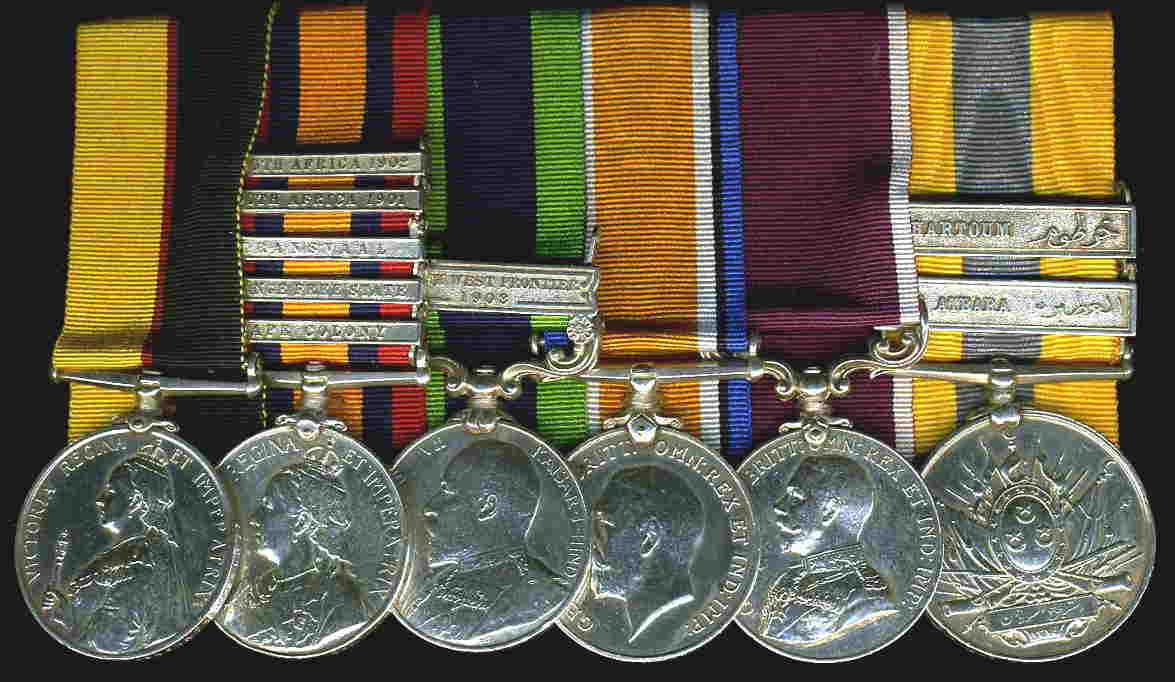 A long-service group, the Khedive’s Sudan (far right) carrying the usual clasps seen to British recipients – The Atbara and Khartoum

All the other 11 clasps are rare to purely British recipients and went largely, in their case, to officers and NCOs serving with the Egyptian and Sudanese units which bore the brunt of the campaigning after the occupation of Khartoum.

However, thanks to an extraordinary career in the Sudan, one man belies this statement. He was Major Samuel Kirk Flint who over the course of ten years, from 1896 to 1905, earned a remarkable (and remarkable-looking) Khedive’s Sudan Medal with 10 clasps – a unique award, certainly to a British recipient. Apart from promotions and multiple “mentions”, he was rewarded during the course of this service with Turkish orders of the Osmanieh and Medjidieh. He continued to serve in Egypt and the Sudan during World War One and ended up with the OBE to add to his group of awards. 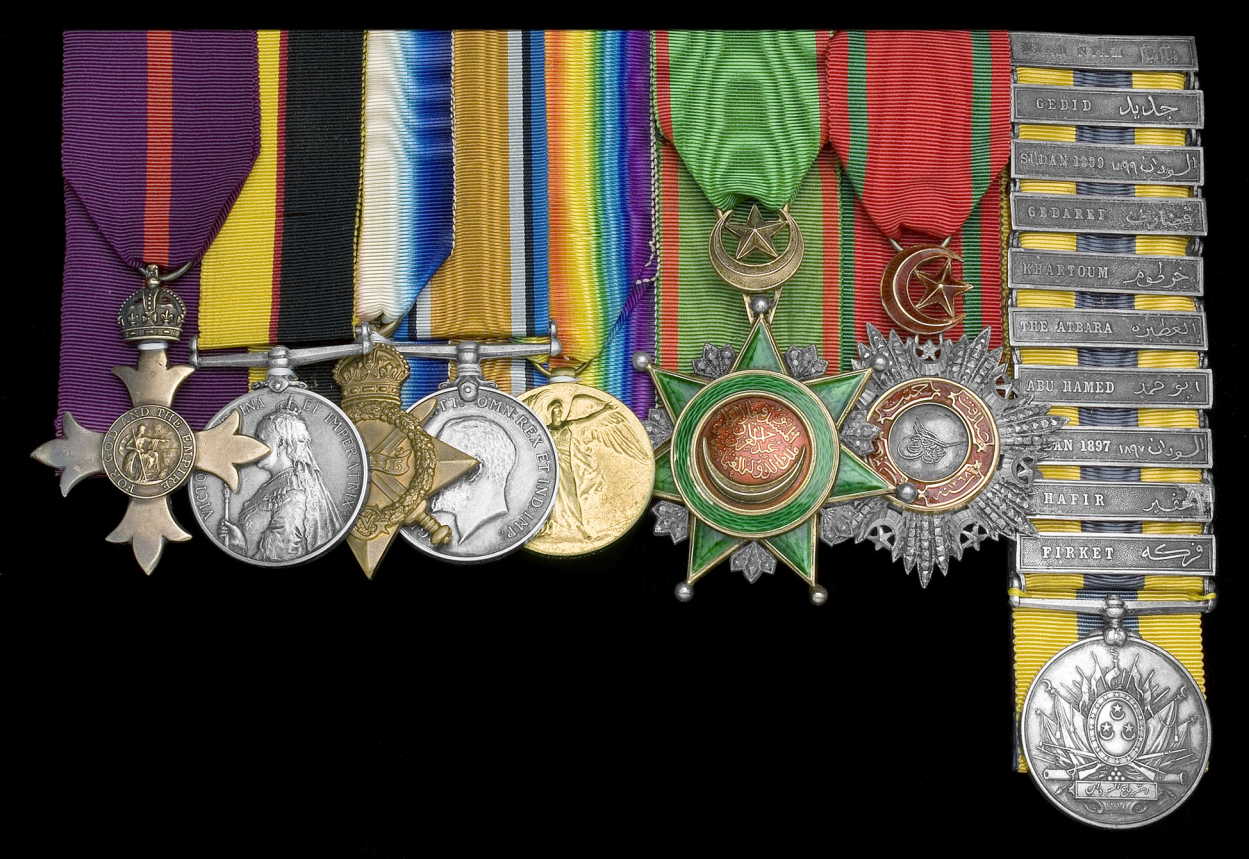 Born in Dover in 1865, Flint enlisted in the Dorsetshire Regiment around 1880 – a young age which may reflect the fact that he was “born into” the regiment; there were certainly other soldiers of this surname in the Dorsets at that time. But sadly, his early military history is unknown since his service records no longer survive. He went on to serve over 16 years “in the ranks”, reaching the rank of Colour Sergeant by 1896. For many Victorian soldiers, this length of service (16 years) would have been quite enough, but for Flint it was actually just the beginning of a long and fascinating career.

It was the Dongola campaign of 1896, at the start of what became the Anglo-Egyptian reconquest of the Sudan, which really marks a rebirth in Flint’s career. For some reason now untraceable, Flint was selected to be “employed with the Egyptian Army” and served with the transport section in the 1896 operations. As a reward for his “distinguished service”, he was “mentioned in dispatches” in November 1896 and commissioned into the Royal Irish Rifles. A few years later, on 25th Aug. 1900, he transferred into the Royal Fusiliers and served as a Captain and Major attached to the Egyptian Army. 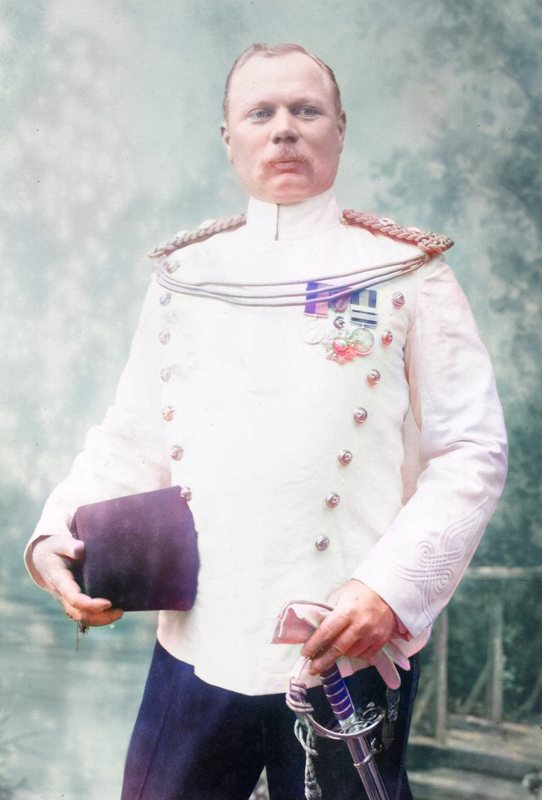 In actual fact, Flint must have spent no time at all with his new British regiments: for ten years, he saw almost constant service in the Sudan with the Egyptian Army and obviously became a reliable specialist in transport duties.

It is easier, rather than trying to relate a range of campaigns and actions, to simply summarise his service :

Advance on Khartoum : Clasps The Atbara and Khartoum.
Mentioned in Dispatches, 30th Sept. 1898

Operations on the Blue Nile: actions around Gedaref (clasp) Sept. – Dec. 1898.
Flint commanded the transport of the force engaged.

Awarded Order of the Osmanieh, 4th Class, “in recognition of valuable services rendered by him to the Egyptian Government”; London Gazette, 9th Aug. 1904

Bahr-el-Ghazal operations: Jan-May 1905 campaign against the Nyam Nyam (clasp).
Only 18 British officers accompanied the forces engaged.
Mentioned in Dispatches, 18th May 1906 and advanced to Brevet of Major “in recognition of [his] services during the  operations in the Bahr El Province from January-March”.
Commanded the Transport. 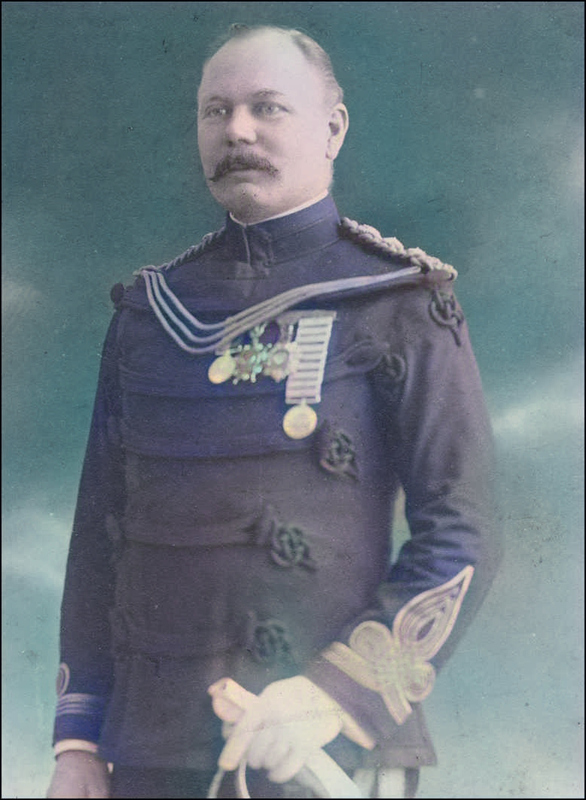 Two of these expeditions stand out in terms of achievement. In November 1899, a column under Colonel Reginald Wingate, commander of the Egyptian and Sudanese forces deployed (and later Sirdar or C-in-C of the Egyptian Army), pursued the remnants of the Khalifate’s forces south of Khartoum. He led a column of about 2,500 men over 60 miles and fought two engagements within sixty hours, the last at Gedid on 22nd November. The latter was decisive and saw the final defeat and death of the Khalifa Abdallahi – ruler of the Sudan as the successor to the Mahdi – who had escaped the debacle of Omdurman. Over 9,000 dervishes were captured and the reconquest of the Sudan was regarded as complete as of that date.

The 1905 campaign against the Nyam Nyam people (now called the Azande) was fought against a remote, “troublesome” tribe under their chief Yambio on the borders of the Belgian Congo in the remote Bahr-el-Ghazal province. Viewed as a “punitive expedition”, its actual aim was to establish British control over areas on the Belgian frontier to block potential Belgian expansion towards the Nile. Wingate gave command of the operations to the experienced Sudan campaigner Major W. A. Boulnois, R.A., governor of the Bahr-el-Ghazal province. A two-pronged attack was launched against Yambio, and though only 800 men were deployed, they had field guns and maxims. With these, Boulnois attacked and defeated Yambio, who was killed, and whose territory then came under British control. Major Boulnois himself died on the return journey. For this expedition, which turned out to be Flint’s last Sudan campaign, he was “mentioned” by Sir Reginald Wingate in the following terms:

‘Captain S. K. Flint, Royal Fusiliers, was in charge of the transport, a duty which involved very hard and continuous work; in spite of heavy losses in animals this officer succeeded in keeping the troops as well supplied as was possible under the circumstances.’

Promoted to Brevet Major in 1905, Flint married in Kent that same summer and retired in November 1906 after 26 years of fairly continuous military service in a harsh and difficult environment.

But even this was not quite the end of his active career. It looks very much as if Flint never left Egypt – he must have felt more at home there than in England – and on the outbreak of war in 1914, was recalled to or rejoined the Royal Fusiliers. He served as a Major throughout 1915 in Egypt before being appointed to the Sudan Legal Department. What exactly qualified him to work in that specialist department is unknown, unless it was a fluent knowledge of Arabic and a certain bureaucratic flair, but at the end of the war he was appointed O.B.E. for his war work in the Sudan. He had by then come a long way from the Dorsetshire Regiment and 16 years in the ranks!

After World War One, Major Flint returned to the UK with his wife and lived in retirement in Beckenham and then in Sidcup. He died there in April 1937, at the age of 72; his wife lived until 1959. Today, a rather impressive medal group remains to remind us of an extraordinary career in some of the now-forgotten incidents of the Sudan campaigns.