The single clasp issued with the Edward VII IGS was “Waziristan 1901–2” which tends to be one of the less collected or less well known campaign issues, though examples to Indian soldiers are common enough. The issue was called for as a result of a series of punitive expeditions against the Darwesh Khel Wazirs and Mahsuds of Waziristan. Quite a few “North West Frontier” and “Waziristan” clasps were awarded over many years for service against the Mahsuds who were surely the most intractable opponents the British faced on the North West Frontier in a hundred years of contact with the region.

After the Waziristan campaign of 1894-5 (for which a medal and clasp were issued), there were repeated Mahsud raids into British territory and a frustrated government, which seems to have exhausted the possibilities of negotiation and fines, decided to impose a full blockade of Mahsud territory in Dec. 1900, stopping all trade and movement in an out of their tribal lands. Reinforcements were sent to frontier garrisons and two “moveable columns” were formed at Bannu and Dera Ismail Khan to enforce the blockade. Since the area is so devoid of resources, it was hoped that this would inflict major economic damage and would bring the Mahsuds to submission – but it failed to have any effect and raids continued. The government therefore decided on military action to enforce compliance and to exact fines and compensation for misbehaviour. 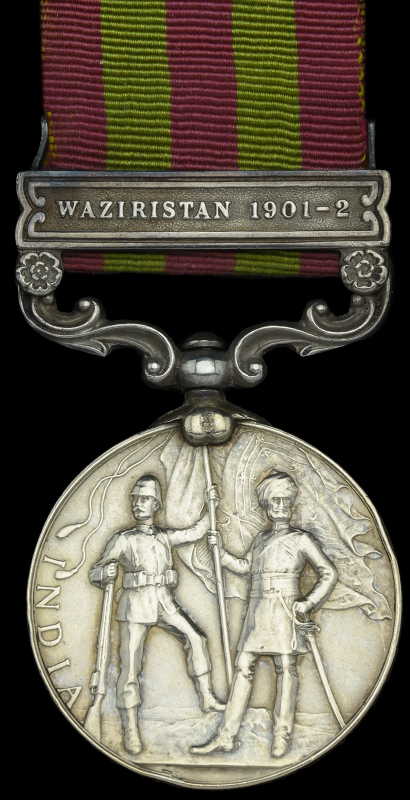 The clasp “Waziristan 1901-2” was awarded for service in a series of what were essentially light raiding columns which operated for 3-4 days each in Mahsud and Waziri country. The main columns were :

1. No 1 Column under Lt. Col. V.C. Tonnochy operating from Datta Khel to Makin  (see below).

6. Two columns operating from Jandola (under Brig. Denning) and Sarwekai (under Col. Hogge) converging on Dwe Shinkai. This was by far the largest operation and involved 4 guns of the Gujerat Mountain Battery, 1st Punjab Cavalry, 1st, 27th and 28th Punjab Infantry, 35th Sikhs, 38th Dogras, 45th Sikhs and South Waziristan Militia (in the Jandola column) and 2 guns of the Gujerat Mountain Battery, 23rd and 32nd Pioneers and 29th Punjab Infantry (in the Sarwekai column) from 19th Dec. 1901 – 8th Jan. 1902.

The aim of these operations was simply to cause as much damage as possible to crops, livestock and buildings, to force the tribesmen into submission sooner rather than later. It was economic warfare.

From these now-forgotten punitive columns, one incident stands out as worthy of recall. This was the so-called “Tonnochy Raid” of November 1901 which is held to be one of the best examples of a “hit and run” action ever organised on the Frontier. It was long held up as a model of thorough planning, rapid execution and successful operation.

On 22nd November 1901, the 2nd Punjab Infantry under Major E. H. Rodwell arrived at Datta Khel as a routine relief for the 3rd Sikhs, who had been on duty in the fort under Lt. Col. Valens Congreve Tonnochy. Tonnochy was an old hand at frontier warfare, having served in a succession of frontier operations from the Mahsud campaign of 1881 right through to the recent Malakand, Tochi and Tirah operations in 1897-98: he was to be mortally wounded in action on the Frontier later in 1902. The arrival of the 2nd PI provided a sudden increase in the strength available to Tonnochy at Datta Khel and he decided to use the entire force to launch a lightning strike against the Mahsuds. Accordingly, it was given out that the 3rd Sikhs were to return to Bannu on the 24th but instead, Tonnochy organised there and then a fighting column. At 9.00 p.m. on the night of 23rd November, he led out a small but powerful force, directed against the major Mahsud tribal centre of Makin – the target of a number other British punitive columns in the past. Tonnochy’s force comprised :

2 guns of the Derajat Mountain Battery under Lieut. Hill.

500 men of 3rd Sikhs under Major F. H. Taylor, from which were taken 30 men to serve as “mounted infantry” – riding mules!

Supplies were stripped to the absolute essentials: two days’ cooked food and 100 rounds of ammunition were carried by each man and only a bare minimum of “followers” was allowed – four per regiment, with 82 porters and two hospital assistants. Despite the bitterly cold weather in the hills, no tents or heavy equipment were taken, the men relying on greatcoats which they carried with them. 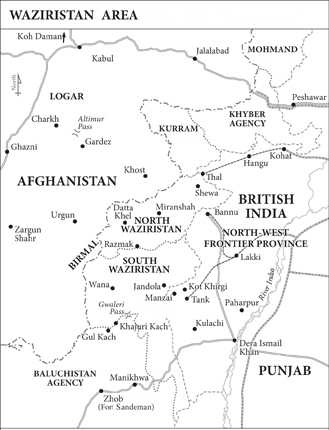 The route taken to Makin was via the Spinapunga and Shuidar passes – a difficult, steep and broken track through dangerous defiles. At 3.00 a.m. the head of the column rested at the foot of the Spinapunga pass, at an altitude approaching 9,500 feet, but it was not until 10.30 that the whole force was concentrated and the advance continued to the head of the Shuvan Algad. By now, the Mahsuds had realised that a fighting column was in their midst but had no time to do anything about it. The column remained bivouacked here on the 24th and began the process of blowing up village towers throughout the area, which was done by an explosives party under Captain S. H. Sheppard, R.E. Thirteen villages were also burned, with only token resistance being offered. Later in the day, the entire force passed through the Algad in the direction of Makin, only four miles off, but it was then too late to do anything other than retire to quarters for the night at the village of Bitt Malik Shahi on the Razmak plain. This village was to be the column’s base for operations over the next two days.

On 26th November, foraging parties were sent out to requisition food and a “decoy” column sent towards the Shaktu Pass – which seems to have successfully deceived the tribesmen as to the direction of the attack. Next day, leaving approx. 150 men at Bitt Malik Shahi – including the sick and the exhausted – the whole force advanced to Makin, again facing only slight resistance in the form of long-range sniping.  In due course, the fort was successfully stormed by the 3rd Sikhs. Most of Makin was destroyed by fire (not for the first or last time!) and its defensive towers blown up. The column returned to Bitt Malik Shahi in the afternoon.

Having dealt a serious blow to the very heart of Mahsud territory, the column immediately began its return march via the Razmak defile. The 2nd Punjab Infantry formed the rearguard and for the first time the Mahsuds made some organised attempt to retaliate, following the column as it retired and engaging the rearguard at fairly long range. However, even this pursuit stopped as the column re-entered British territory and after a brief halt at Mamirogha, they arrived back at Datta Khel late at night on the 27th November.

The whole expedition suffered what might be regarded as light casualties – three men killed in action and one British Officer, one Indian Officer and 13 men wounded. 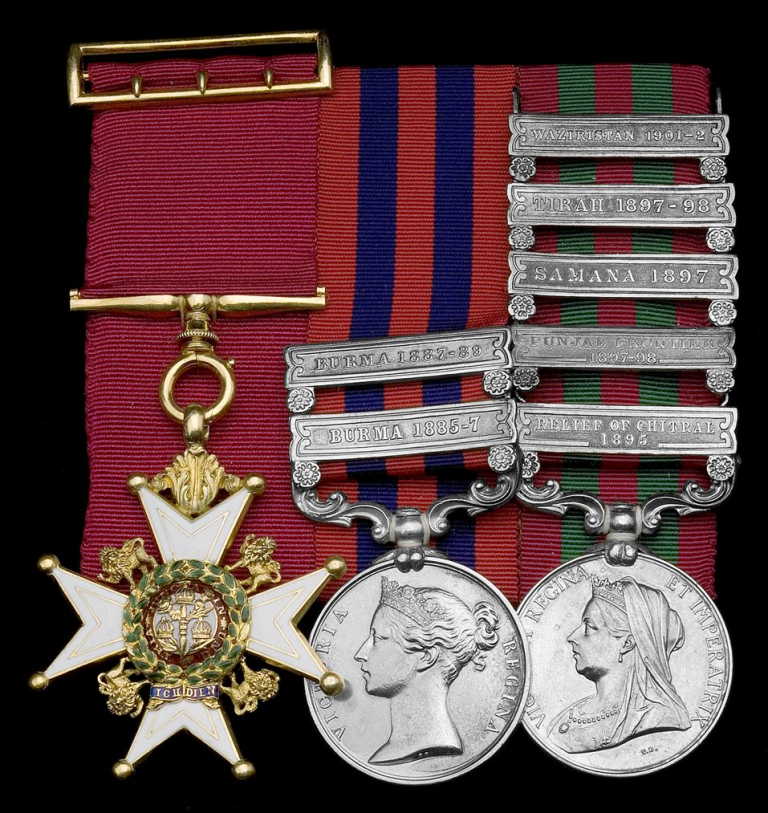 Col. Tonnochy’s medal group, with C.B. for Mekran 1902. He was killed on the frontier later that year. [Messrs. DNW]

Here was an example of what a well-planned expedition could do to strike into the heart of its enemy’s territory. The men were fit enough to endure the rigours of the march and the cold; the attempts at deception in terms of the direction of the attack seem to have worked and the whole operation had been completed very quickly – four days from beginning to end.

Medal in bronze as awarded to Indian camp “followers” and other non-combatants.

The clasp “Waziristan 1901-2” was awarded by Army Order 44 of 1903 for service “west of the administrative border” between 23rd November 1901 and 15th February 1902. Only a handful of medals for these operations were awarded to British troops; there were no “full” British regiments or units involved and just a few “odd men” from British regiments were the only recipients – mainly as signallers or serving with the transport. The vast majority of awards went to Indian regiments including some of the units of the elite Punjab Frontier Force.